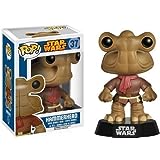 Long, long back in a galaxy much, far away, a group of individuals chose to flee their failing galaxy and traveling to one more one. They boarded their ship as well as flew and flew. Eons passed, and ultimately the ship reached our galaxy. Turning all their armaments in the world, they got ready for attack. Nonetheless, as a result of a terrible mistake of range … well, let's simply say these Star Wars Pop! Plastic Figures – Series 5 befalled of the skies, shall we? Collection 5 has some wonderful characters. There's Hoth Luke, prepared to get cold with it. There's a Biker Scout, prepared to crash right into a tree. There's Bossk, all set to grumble and then do nothing (on display). There's the Emperor, all set to break wind and act to not hear it (as really old, wicked people have the tendency to do). There's Momaw Nadon, called Hammerhead right here from his initial activity number look. As well as finally, there's the super-sized Wampa, ready to threat Hoth Luke. Yet not a "phantom" menace. NEVER a phantom hazard.